This monster episode of 81 minutes is not able to be split into the usual character categorisation. It is because the first scene alone features every character that anyone cares about (excluding Dany) showing up in Kings Landing.

The Dothraki and the Unsullied rock up in the bay of Kings Landing, while good old Jaime and Bronn stand being impressed and hopeless and jealous and scared about the numbers that the Mad King’s daughter had gathered in her army.

Everyone is to gather in the dragon pit, which hasn’t been used for hundreds of years. We get more info on the dead dragons. Cersei is preparing her diplomatic actions as always, telling the Moutain which order to kill them in, in case ‘It goes wrong’.

Meanwhile, everyone catches up. Brienne and the Hound bump into each other, (so who else thinks that Brienne has mad hots for the hound). Brienne informs him that Arya is alive and he finally gives up his grudge against a 14-year-old assassin (probably a good decision dude).

Of course, when everyone’s settled in, Dany finally decides to rock up on her dragon after making everyone wait around for a while. Of course, arriving with two dragons and not three doesn’t quite have the same effect. Cersei isn’t overly shocked at this, which I can understand. And so, we finally see the little girl as compared to the seasoned woman, as Cersei’s only remark is “You’re late”. Yeah boo, that was the point.

Euron, who apparently thinks he’s the man of the moment, abruptly stands up in the middle of Tyrion’s greeting, commanding Theon to ‘Submit’, or he’ll kill Yara. Anyway, Tyrion takes back his talking stick, and they get down to business to defeat the White Walkers.

The convo gets hella deep…, life, death and zombie snowmen etc., when Jon starts rambling about the army of the dead, ensuing eye-rolls in every direction. Cersei is busy slapping the peace signs out of the way when the hound climbs out of the ground with a wooden treasure chest full of death on his back.

The Hound reluctantly kicks the captive white out into the arena so that it can frighten poor old Cersei into half a heart attack. It would highly satisfy me to see Cersei die due to her life expectancy.

Jon uses the power of demonstration in his presentation (it kind of rhymed don’t hate on me) to show Cersei how to kill a white walker (because she’s for sure going to be fighting them herself, hey).

Euron then declares his immediate plan to run away from Westeros mainland and suggests y’all go back to the islands. Cersei tells Jon “The crown accepts your truce. Until the dead are defeated, they are the true enemy.”. We should’ve seen it coming… 40 minutes left and everything is just a-okay. Yeah right.

Of course, Cersei has her conditions laid out. She’s all “I’ll be chill with you if you don’t fight with the dragon queen after we’re done here” and she chucks in a little something extra in the party bag of emotional manipulation adding; “I know Ned Stark’s son will be true to his word”. Of course, she’s half right, taking into account her oblivion on the subject of Jon’s parentage. He is true to his word, that dumb, honest adorable idiot. Which is why he’s like “um I already swore myself to this girl here sorry doll” I mean, she gets it, incest and all. Right? Cersei can be democratic right? Nope. Not at all.

The team huddle that follows this blunder looks like this; 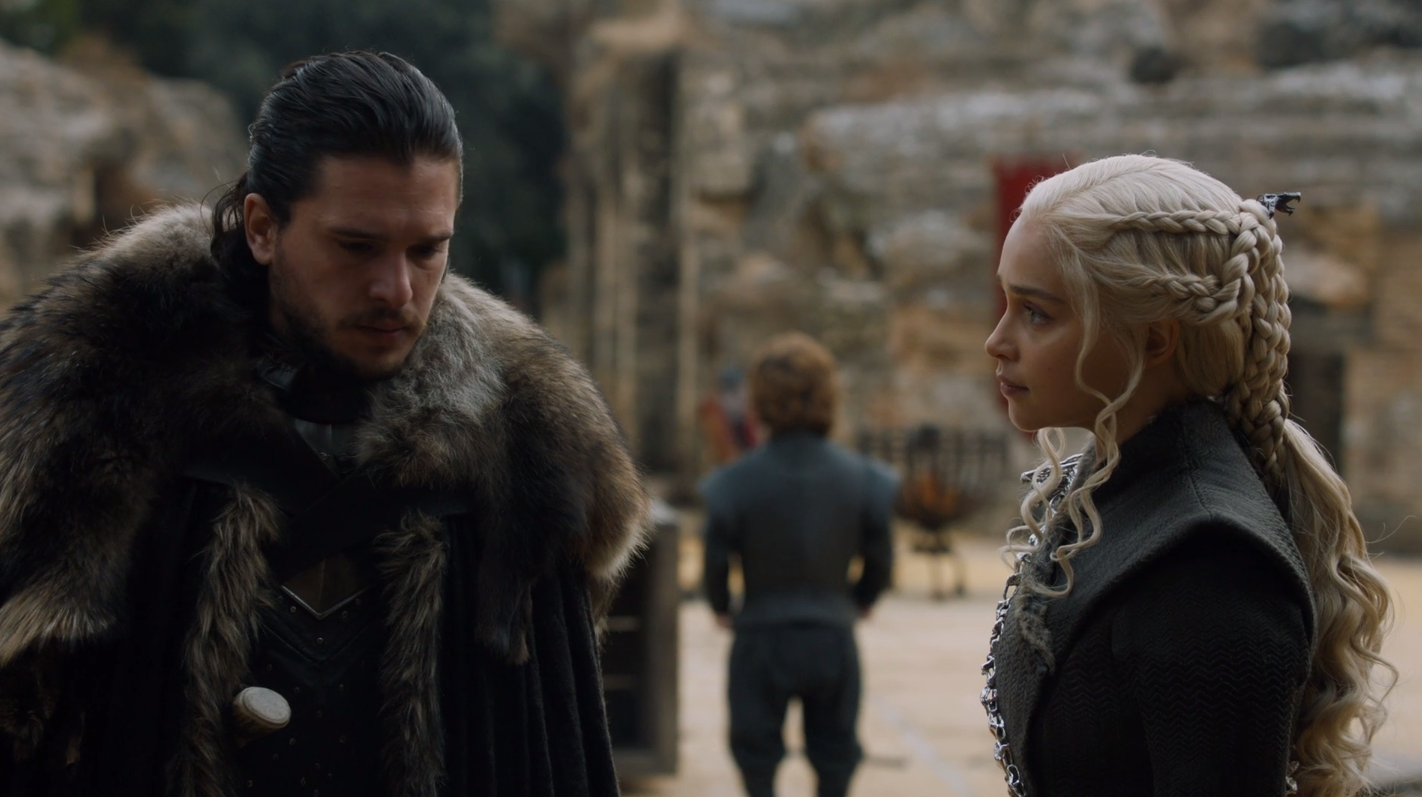 Crybaby Jonny holds back tears long enough to make his speech about the value of the truth. “Lies will not help us win this war,” he says, umm no, a lie would have ultimately won this battle for you. That lie, just then. However, I do have respect for his preaching of “if enough people make false promises, words stop meaning anything”. I felt that in my soul dude.

So Tyrion decides that he’s the least likely to be murdered if he goes to get his sister for a de-brief. So he walks in, drinks half her wine, and endures her lecture, with her explaining her pain saying; “Your feelings don’t matter. I don’t care why you did what you did, I only care what it cost us.” Fair enough girl, fair enough. I mean Sansa goes through hell, and she’s “a feminist icon”, but Cersei’s entire fam dies, and she’s just a psychotic old lady.

Anyway, eventually Tyrion hits the jackpot with Cersei’s pregnancy, and she promises to help just to protect her new family.

Switch back to Dany and Jon, who are having an educating chat about how Dany probably shouldn’t take gynaecologist advice from the witch who sent her beloved hubby to his tragic death.

Cersei interrupts this convo to promise her loyalty once again, “When the Great War is over,” she tells them, “Perhaps you’ll remember I chose to help. Without promises or assurances from any of you. I expect not.”

Jon and Dany then decide to save the north together. Jorah is just cryin’. Then Theon and Jon have a DNM, which results in Jon saying something like “I forgive you for everything that I can.”

Anyway, Theon and some random angry guy get into a fight, but Theon wins because getting hit in the balls he doesn’t have doesn’t hurt him. This seemed to fill him with rageful creepy energy.

Back to Winterfell where Sansa appears to be bringing Arya up on vague charges of murder and treason, which she follows with “How do you answer these charges… Lord Baelish?” DAAAAANGG I’M HERE FOR IT.

He died cause he lied, he got stabbed by the knife he lied about.

Back in Kings Landing, Cersei’s clicked about Dany’s two dragons and not three… and plots her betrayal. She lies to her brother lover, he gets mad, she threatens to kill him, AND FINALLY,  HE DUMPS HER CRAZY ASS.

Sam meanwhile meets the mysteriously omnipresent Bran, who says “I’m the three eyed raven.” and of course, Sam the underdog and speaker for all, say’s “I don’t know what that means”. Meeeeee.

The two, however, manage to piece together the info they both have, even though Bran ‘knows everything’, pfft okay Bran, the wheelchair man, you, do you.

Anyway, thank you, writers, for ruining the event I’ve been waiting for over the last couple years by having the voiceover of the epiphany of Jon’s parentage going on in the background. Thank you so much guys, for the chance to gush over my OTP getting together while also being informed of how they are direct relatives.

Also, I’ll end this case with my question of why exactly Tyrion is left brooding outside Khaleesi’s doorway???

Ahh, Game of Thrones, enabling us all to consider the relevance of genealogy in decisions such as, “Who should rule the country?” and “Who should kiss who?”.

Up at the nights watch, the snow zombie dragon takes down the wall with its… fire? Perhaps?

Okay, now, what is this??? Exactly how does the dragon’s ‘fire’ work? Is it ice? Is it magic? Is it fire? Is it the flames of hell or only a magically destructive ice breath? How many minty’s did he eat to get that kind of fresh?

Anyway, through all the chaos and destruction, I’m still here like “hey, but Tormund is still alive right?”, “what about the giant conquering babies?”

Other posts in this Series:

Pun of the Day

A thief fell and broke his leg in wet cement. He became a hardened criminal.

13 Cliché Things you Always see in a Scary Movie

The Truth About School Reports In 5 Minutes

The Endless Benefits of Expanding your Playlist

Why not make Iced Coffee?